Yogi Manmoyanand is one of the few living teachers of the Saraswati lineage, which goes as far back as to the year 800 AD. For seven years, he lived and practised amongst a group of ascetics in the caves of the Himalayas. 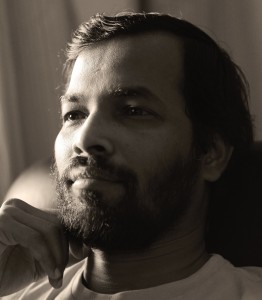 His knowledge on various yogic and Vedic scriptures were given to him by Yogi Angadanand Saraswati, who wanted him to become a teacher for students of the ashram, but also for students who lead a normal worldly life. Manmoyanand accepted this responsibility out of respect and obedience for his teacher and lineage.

Yogis believe that the study of Ayurveda can not be done within the four walls of a classroom of a University or School of Ayurveda. It is a yogic practice (Sadhana) that is given to the authentic Yogis after many years of successful practice of Yoga. Yogis study Ayurveda by knowing and being the nature.

Yogi Manmoyanand has been studying and practising Ayurvedic and natural healing for the last 25 years. Because of his expertise on the subject, for the last twelve years he gives lectures and seminars on the subject in various countries (India, Europe and America) to private people as well as to professionals.

Yogi Manmoyanand doesn’t support unvarified and/or superstitious beliefs in the name of Ayurveda. He has both a traditional and scientific approach to the subject of and uses no harmful chemicals for the treatments. As an expert in plants and herbal medicine, he believes in medicines and ingredients which are handpicked and prepared by himself for every treatment and therapy given.